This weekend I discovered "A Late Quartet." Released in 2012, starring Christopher Walken (cello) and Philip Seymour Hoffman (violin), the film describes the creative process and the all-too human makers of music who comprise the (fictitious) Fugue Quartet.  And yes, there is a medical subplot involving a neurological disorder that affects one player (spoiler avoided, I hope) and therefore the unity of the ensemble.  But this isn't why we're exploring the film in this space.  I have another idea in mind.

But first, a little more about the characters.  Walken (an actor who so often plays odd or supernaturally-tinged roles that I have trouble watching him, and this is an unfair bias) is Peter Mitchell, the elder statesman of the Fugue.  His personal mantra is unwavering commitment to the music, into which nothing - and he means nothing - must intrude.  He is integrity personified, but on stage, he is not the star.  That role belongs to Daniel (played brilliantly by Mark Ivanir), as first violin.  This much younger man is the quartet's precision instrument.  When not engaged in relentless practice, he attends to the care of his instrument.  In a telling scene, he takes a student to the farm where he personally selects the horse hair that will become part of his bow.  It is that important, he tells her.  "Everyone says you're anal," she tells him. 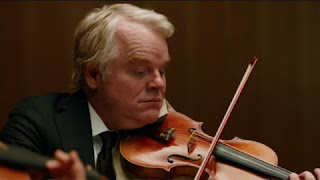 Perhaps best known among cast members is Philip Seymour Hoffman, whose part is "second violin."  We become aware, however, that as in any string quartet, his role is anything but subservient.  He is surely no second fiddle.  Violinist Robert Gelbart is mid career, accomplished and passionate.  For him, a rehearsal without debate is empty, a performance without risk a waste.  He is the quartet's Freudian "Id,"its expressive force, and its soul.  Gelbart's wife Juliet, played with warmth and feeling by Catherine Keener, serves as violist.  She is the quiet one, the emotional glue (though privately tortured).  She is the conscience, the memory and a necessary counterweight to her husband's unbridled urgency.

I wonder whether any other physicians experiencing this film apprehended an extended metaphor for the doctor's mind and spirit, and indeed for our profession as a totality.  Or maybe not.  Is limitless commitment now out of style, replaced by a focus on work/life balance? Or passion, for that matter - has it been stifled by a healthcare "industry" which believes that physicians need monetary bonuses for adhering to scientific guidelines? I would argue that like the quartet that is the collective star of this thoughtful film, life and circumstance may intrude and threaten, but the guideposts endure.

Importantly, none of these characteristics - commitment to the work, the pursuit of perfection, passion, the drive to innovate or the centeredness necessary for personal and spiritual health - I say none are sufficient individually, yet all contribute to the harmony of self, and indeed to the creative urge which is at the authentic heart of music...and the medical profession.
Posted by Michael B. Grosso, MD at 8:41 AM No comments: