What IS Romneycare? And can we possibly afford it?

With the rhetoric flying in every direction in this pre-election season, separating fact from fiction is a daunting task, especially in the complex world  of healthcare delivery and finance.  Figuring that his party's own websites would provide the most favorable take on Mitt Romney's healthcare position, I visited www.mittromney.com/issues/health-care.  This is what it says:

"On his first day in office, Mitt Romney will issue an executive order that paves the way for the federal government to issue Obamacare waivers to all fifty states. He will then work with Congress to repeal the full legislation as quickly as possible.
In place of Obamacare, Mitt will pursue policies that give each state the power to craft a health care reform plan that is best for its own citizens. The federal government’s role will be to help markets work by creating a level playing field for competition."
Certainly this is consistent with the Republican platform.  The fix for unemployment: less government.  For the environment: less government.  For energy: less government.  For education:  less government.
Here are my concerns.
1.  Policy analysts and experts from many quarters - the Institute of Medicine, National Quality Forum, Institute for Healthcare Improvement, academic centers, various professional societies and others - have weighed in.  To the best of my knowledge, no credible expert has made the claim that "less regulation" is the key to reversing our spiraling healthcare costs.
2. As we all know by now, the US pays more for healthcare than any other nation in the industrialized West with poorer outcomes than most.  Now, how many of these more successful nations provide examples of the Romney philosophy succeeding in reducing cost and improving quality?  Answer: none.
3. The Romney philosophy fails on the level of principle.  The unsustainable hyper complexity of the private market has been a part of the problem; it can't also be the solution.  So has a fee-for-service market that pays for interventions rather than outcomes.  The predictable result has been a vicious cycle of "more" - more tests, more images, more operations, more hospital admissions - more than are good for us and more than the best medical scientists recommend. 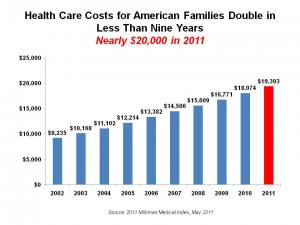 Mitt ought to have asked some doctors.  Believe me, we understand over-regulation.  But in the doc's Main Street office, it's not "gumment"  that's the bogeyman.  Talk to the staff - multiple individuals in each office - who spend all day, every day interacting with multiple insurance companies (the folks that Mitt is counting on to fix the problem).  Each one has its own separate rules.  What tests require "pre-authorization" (by a clerk).  What antibiotic your doc can order.  What screening tests you can have.  And every time any insurer says "yes" to anything, it is eroding its own profit structure and harming its shareholders.  This conflict of interest is not theoretical.  Your doc feels it.  Every day.
Free markets work exceedingly well in so many areas of our economy.   But even the framers of our Constitution favored public libraries; and (public) fire departments were established in Colonial America to serve the common good.  Romney-style private competition as mis-applied to our national healthcare system not only leaves unperturbed the cycle of spending, complication, quality problems and waste, but worse yet throws gasoline on the conflagration.  Cooler heads must prevail.
[DISCLAIMER:  the foregoing comments are the private views of the author and not necessarily those of Huntington Hospital or the North Shore LIJ Health System.]